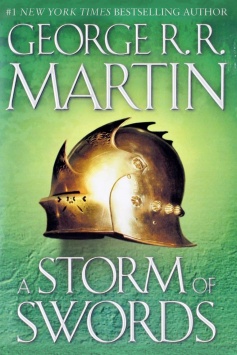 It may seem odd to write a review of the third book in a series without having first written reviews of the previous two. But that’s just how good Martin’s A Storm of Swords (2000) is. Unlike the second tome in the Song of Ice and Fire saga, A Clash of Kings, I tore through these pages. I had trouble putting the book down, even to eat—it’s been years since that’s happened to me. I read late into the night, feeling every inch the little girl who once snuck a flashlight under the covers to read past her bedtime.

I was first introduced to Game of Thrones like thousands of others—via the HBO television series. I remember seeing first look photographs in an Entertainment Weekly article and thinking that it would probably be good because of Sean Bean. I’ve been hooked ever since. After only a few episodes, I knew that I would read the series; it wasn’t a matter of if, it was simply a matter of when.

While I haven’t yet read the two books that come after Swords (A Feast for Crows and A Dance with Dragons, respectively), I cannot help but feel confident that Swords is the best book in the series thus far. It begins during the end of book two, overlapping slightly with the traumatic Battle of the Blackwater, propelling the reader from the largest battle in the War of the Five Kingdoms to every single repercussion imaginable.

It is difficult to write a spoiler-free review for a series this popular, so if you haven’t read the books or are not caught up through season 4 of Game of Thrones, I suggest stopping here! That being said, although I prefer reviews that are short and sweet, Game of Thrones is anything but. This review focuses briefly on the three houses that I consider to be the biggest players in Swords.

It behooves us to begin with the Starks of Winterfell. Whether they like it or not, the family is entrenched in the war for countless reasons—Ned Stark’s beheading, Catelyn Stark’s seizing of Tyrion Lannister, Robb Stark’s claim to the “Kingdom of the North”, and Sansa’s betrothal to King Joffrey, to name a few. This installment finds King Robb trying to secure the North as best he can. Although he seems to win every battle, and is even able to capture Ser Jaime Lannister, he is still unable to hold his kingdom against the forces of King’s Landing, the Iron Islands, and everyone else involved in the continual bloodshed. His mother Catelyn attempts to give him good counsel, despite being in mourning for her husband and her recently departed father. Young Arya is presumed dead by almost everyone, but is a strong little fighter who, despite changing hands multiple times, is making her way toward the Free City of Braavos at the end of the text. Sansa’s betrothal to Joffrey falls through (THANK THE SEVEN), but she ends up being married off to Tyrion Lannister, who doesn’t want the alliance any more than she does. Sansa endures much grief throughout the story, but I was continually amazed by her resilience, and am convinced that she is one of the strongest characters in the series. She survives living in the den of Lannister lions, among the very people who murdered her father (and later her mother and brother—note to self: never watch the Red Wedding scene again), and escapes to the Vale of Arryn with Littlefinger.

As for Jon Snow…well, he knows nothing. Except just about everything having to do with the Wildlings and the White Walkers and the land beyond the Wall. Swords showcases his loyalty, human nature, and potential. And if someone would stop and listen to him, the Night’s Watch would be a lot better off.

Let’s be honest: the only Lannister anyone cares about is Tyrion. He’s an intellectual badass, is fluent in sarcasm and wit, and hates Joffrey as much as you do. Also, there’s a lot to be said for Peter Dinklage, who plays Tyrion on screen. In Swords, however, I was intrigued by how Martin moved me to be interested in what happened to Jaime Lannister. He is possibly the character who undergoes the most development in this text. The reader learns more about his history as the notorious Kingslayer, and while I hate to say it, I grew fond of him toward the end of the book. His relationship with Brienne of Tarth says a lot about the man hiding beneath the White Cloak of the Kingsguard, and I wonder what sort of person he would have been like if he hadn’t fallen in love with his sister, or had Tywin Lannister for a father. After Tyrion is imprisoned and falsely accused of Joffrey’s death at the aptly named Purple Wedding, Jaime helps him escape, and owns up to past betrayals—something the Jaime Lannister of book one never would have dreamt of doing.

Daenerys Stormborn. The last Targaryen. Mother of Dragons and Khaleesi. Dany, as she is usually referred to by Martin, gains a whole new slew of names in Swords as she takes three different cities during her seemingly never-ending trek to Westeros. Her dragons continue to grow, and she begins to use them to her advantage (as in this chillingly wonderful scene from season 3, played almost word-for-word as it was written by Martin).

While I root for a great many characters throughout Swords, and the series as a whole, Dany is my bet for the winner of the war. While she has yet to even enter it, she is the greatest threat to Westeros’s current state. With the different houses at each others throats, an eight-year old on the Iron Throne, and King Stannis’s newfound preoccupation with the Wall and the White Walkers, the time is almost right for an invasion. Dany is learning how to be a queen in her newly taken city of Meereen, has acquired her army of Unsullied and the forces of numerous sellswords, and once her dragons are large enough to ride, she will be nigh unstoppable. Dany learned several hard lessons in Swords, and has grown up tremendously. With some more experience behind her, she would make a good queen in King’s Landing—or would it become Queen’s Landing?—and hopefully put an end to the carnage, slaughter, and misery of the War of the Five Kings.

This is merely a glimpse of the backstabbing, multiple plot twists, and violence of A Storm of Swords. There are as many conspiracies and intrigues as there are characters-whose-names-you-forget, but Martin weaves it all together in a riveting basket as full of mythical dragons as it is relatable mortal weaknesses. And such a heavy basket it is, too. Weighed and measured— 5/5 stars.

Next, I embark on a peculiar journey. I shall attempt to read A Feast for Crows and A Dance with Dragons simultaneously, using Sean Collins’ “All Leather Must be Boiled” guide. Wish me luck, for the night is dark and full of terrors.

What do you think? Cancel reply

“I am not the same, having seen the moon shine on the other side of the world.”